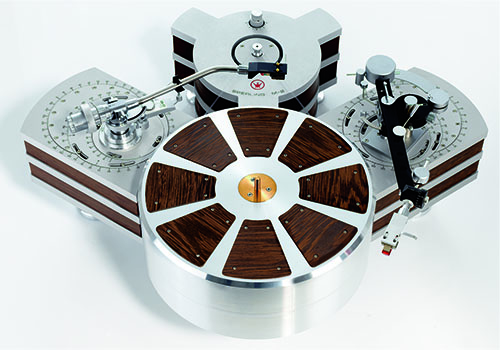 There are a lot of things that have been adapted here and it’s not all as simple as it appears. Flexibility in the handling and uncompromising quality during production show the true character of this hulk of a machine, which weighs in between 50 – 60 kilos.

The turntable can offer a harmony of aesthetics and sound like no other. The basis consists of a massive aluminum support, on which the two tone arm supports rest, each for a tone arm of 9” to 12” in length. An innovative rotation mechanism allows both tone arms to be set at any given distance from the turntable and in every imaginable position, despite its extremely stabile fitting. The tone arm supports as well as the link between the platter and the record are completely tunable, as a result of the choice of different materials (such as, wenge wood, Portuguese argillaceous shale, POM).

Additionally, and also quite revolutionary for that matter, the new Motor Housing M-2 offers the chance to adjust the tape tension with the help of a fine tuning system while the drive is running. The belt tension has a considerable influence on the body of sound, which allows a user to adjust his device based on his own preferences and the kind of music being played.

Innovation meets practical application: the tone arm supports of our L-1 Heavyweight Record Turntable exhibit scalability. This small but important refinement makes it possible for a set and adjusted tone arm along with the base platter to be moved and then at a later time to be reset to the exact same position with very little effort. This is particularly interesting for users who own more than two tone arms and like to change them occasionally. Or even if you choose to switch the arms between the bases on the turntable, or even between multiple turntables.